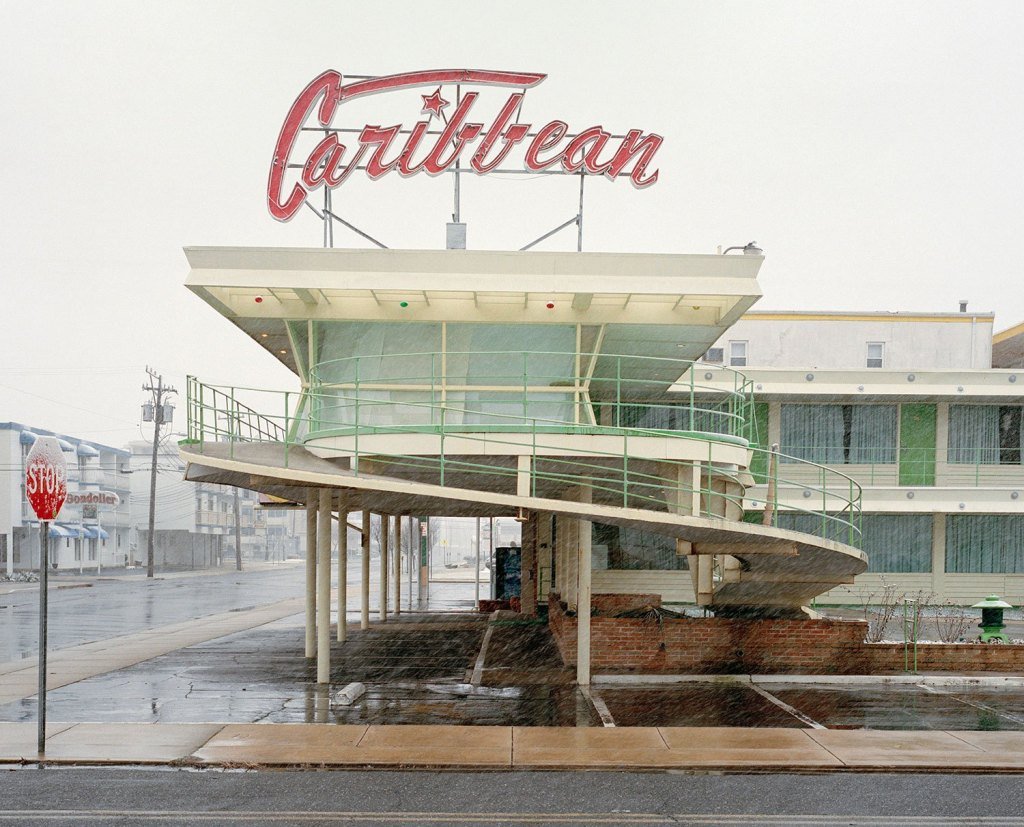 Does anyone wish to have a vacation as soon as possible?

By the mid-20th century, you don’t have to be from an elite corporate family to vacation. Since at least the 1930’s taking regular out-of-town vacation has been a hallmark of making it into the American middle-class said the historian Patty Limerick, a phenomenon called the democratization of recreation. However, nowadays, those kinds of out-of-town vacation opportunities are unaffordable or unavailable to many in the working class. The decadence of American tourism led to a subsequent abandonment of a once idyllic middle-class destinations. In this context, the work of the photographer Tyler Haughey appears to witness partly this phenomenon of decadence. Tyler Haughey lives and works in Brooklyn, son of a union sign painter, his interest in roadside architecture and signage began at an early age. With his series “Everything is Regional” explores motels, coastal enclaves, and part of New Jersey that have not been frequented in mass for a long time. The title “Everything is Regional” is taken from a poem by former US Poet Laureate Robert Pinsky about the area of New Jersey where both he and Haughey grew up. What Haughey shows in his work is a sad irony of the motels signs and style which are often named, themed or punctuated by exoticism of other places (Malibu Motel, Caribbean Motel, Waikiki Ocean Front Inn), and beyond motels there are coastal beaches towns attempting to create an identity through the fascination of a remote world. 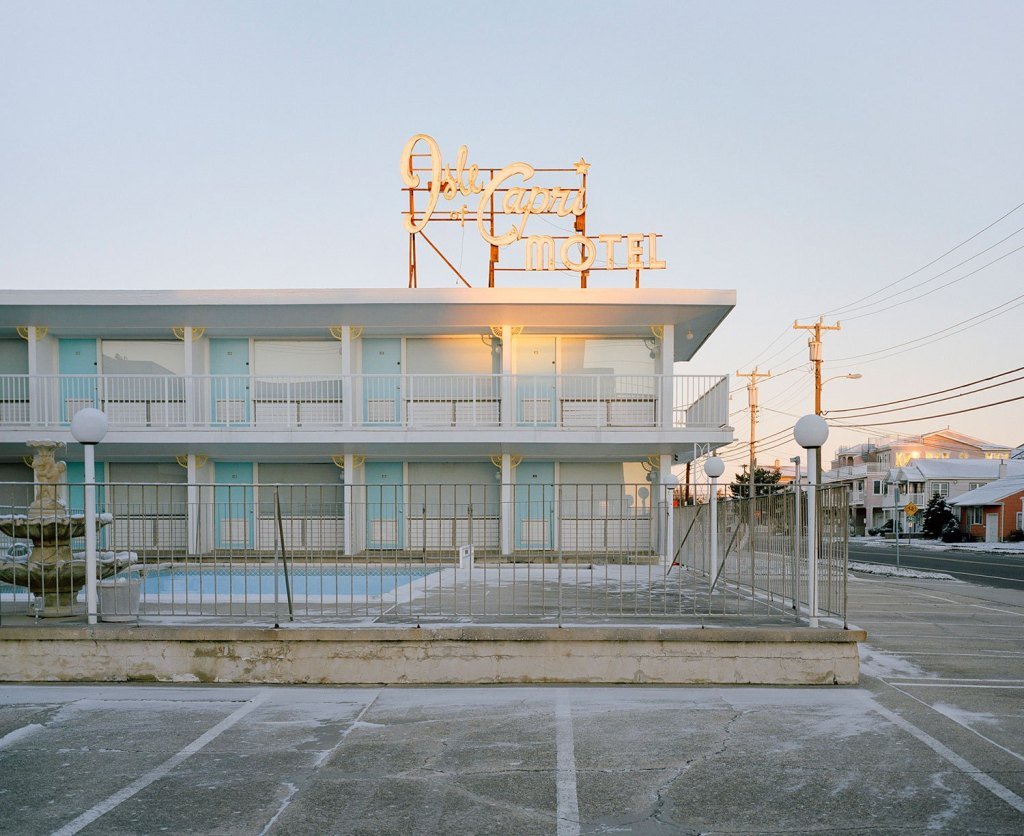 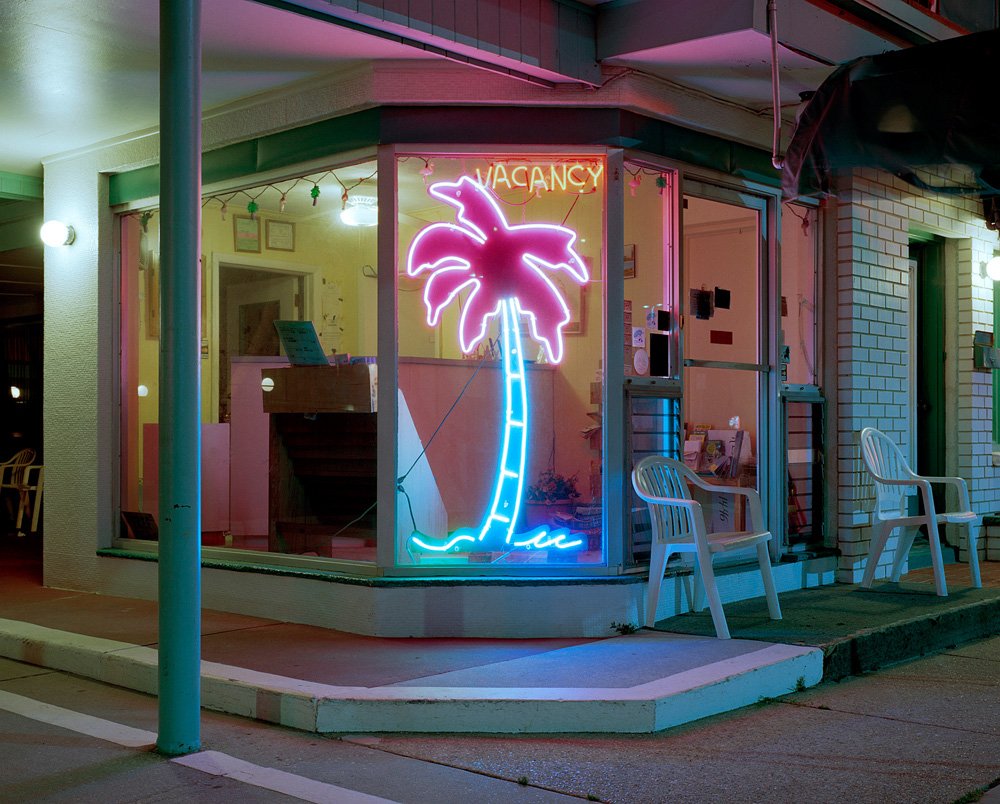 Haughey captures motels winter dormancy, where exuberant neon signage sits in stark contrast against the creepy unpopulated emptiness of winter months. Shooting motels during winter time is also a way of exploring what they look like during the other nine months, when the tourists have gone home. They remain fully functioning and virtually unchanged since their original construction. The motels brought European high modernism to America’s middle class, applying the idea of the “decorated shed” a term coined by renowned postmodern architects. The structures of the vanishing tourism industry document a forced attempt to create a California dreaming, fake palm trees missing their fronds are omnipresent, but also such a fondness of Haughey memories. Those places, like Barnegat Light, are places he visited when he was a kid and for him it was like travelling back in time, with The Wildwoods acting as a nucleus of Everything is Regional. In such fondness, there is a kind of allure, since no perfectly functioning neon signs turned to be on vogue these days, or that a certain vintage scruffiness makes us dreaming of a past of glory. The human presence is absent from the architectural oddities. The originality of the monograph Everything is Regional, published by Aint-Bad, lies in including close ups of old postcards depicting tourists enjoying the pleasure of the shores. The halftone postcards sourced from the archival motel-issued of The Wildwoods, act as a way to consider the once pulse life and the memory of the place depicted. A feeling of nostalgia is guaranteed! Haughey drawn inspiration from various artists that have used this landscape as the basis of some of their most important work, such as the writer John McPhee, architect Andrew Geller, photographers Gregory Conniff and George Tice. Haughey tried to represent the world he is most connected with from a local’s point of view, the point of view of someone who knows the array of landscape that we can find in 130-mile coastline from military bases and massive summer homes to untouched wildlife preservations and blue-collar beach town. The delicate pastel tones of his pictures are an homage to New Jersey summer heydays and leave us with a mix of melancholia and nostalgia of our holidays when we were teenagers.