Domonkos Varga (Budapest, 1998) is a photographer and conceptual artist. His work portrays the influential elements of the world around his generation and, simultaneously, he also has the will to make an impact on people by drawing attention to problematic social issues. His projects are always featuring a well-researched background from which he constructs visual metaphors and builds up meaningful narratives.
He studies Photography at Moholy-Nagy University of Arts and Design in Budapest and Aalto University School of Arts and Design in Helsinki. He is a Parallel Photo Platform 3rd cycle artist and member of Studio of Young Photographers (FFS in Budapest).

Michela Coslovich (MC): Hi Domonkos and welcome to Pellicola Magazine. Could you please introduce yourself and explain your first approach to photography?

Domonkos Varga (DV): I got into photography at a relatively young age, after discovering all sorts of fields of art. I still remember holding a camera equipped with a viewfinder for the first time. It felt like I was in a different universe as a kid, and it was something vivid. Then, I gradually became much more conscious about my interest in the medium and decided to take on an academic journey. At the beginning of my studies, I was drawn towards documentary photography before exploring a way more conceptual approach.
It took me years to realize that I’m more interested in storytelling with visual metaphors than just being a photographer. That was the point when image-making truly became an artistic tool for me.


(MC): On which main subject do you focus your photographic research and how did your artistic practice develop?

(DV): My practice represents more of a thought process, simply how I cope with my frustrations originating from our contemporary living.
Primarily, my projects help me to perceive the social environment that affects us on an individual level. I’m always interested in broader phenomena —therefore, a huge part of my work consists of researching different fields, writing, making sketches, and then reflecting on these visually. Usually, I’m living off these sketchbooks that I fill up with cut-outs from essays, books, and some visual inspirations next to these texts.
However, getting to this more conscious state also required me to explore new aspects of how I work with images and think about the semiotics of photography.
Naturally, I enjoy the process of staging and constructing, just going beyond simply documenting. That’s apt for all my series. However, my final photographic approach often depends on the exact notion I’m exploring. Right now, it is the effects of modern urban tendencies.


(MC): Nowadays, over 55% of the world’s population lives in urban centers, and this number continues to rise. As a result, detachment from nature has caused an exponential increase in cases of depression and anxiety-related disorders. “City Without Walls” investigates this aspect of urbanization and all its implications for human beings. Can you tell us more about your work?

(DV): To circle back to what I mentioned earlier about frustrations, my series began with me having bad mental conditions two and a half years ago. Overcoming my anxiety and panic attacks meant not only a serious personal reflection but trying to understand how my surroundings affect me. So, my question was: how is my urban lifestyle contributing to my mental well-being?
I still remember reading Konrad Lorenz’s thoughts on overcrowding and social decline at that time. Soon after, I started to immerse myself in reading papers on the connection between the present-day urban environment and mental disorders; most data were shocking.
However, I never wanted to constrict my context to the drawbacks of metropolises primarily; also, the issue is more sophisticated than our detachment from nature.
With City Without Walls, I wanted to analyze a complex interconnection between the governance, economy, and our built environment. Mainly the results of a supreme and dependent social structure being in a physical hub that embeds a capitalist order, as it subsequently affects us by dehumanizing people.
In such systems, people are no more than a resource; the idea of “free will“ is reduced to various alternatives in working and consuming. Imagine embodying the dog-eat-dog competition —the worst of humanity— in concrete. Economists love to put the aforementioned ideology around all the unfairness in a supposedly “free“ (rather privileged) state of the economy and justify a kind of Hobbesian natural condition.
Yet, it is enough to look up at a skyscraper and what that represents: pure individualism, hierarchy, and disparity. That’s what we’re craving to live in as of this moment.
I strived to construct an extensive work where I visit some of the “superstar cities“ (as Richard Florida coins the term) to scrutinize and reflect on my academic findings. There I mostly shoot places, non-places, and urban tendencies.
Simultaneously, I started to make more performative and staged images to portray all the claustrophobic feelings and notions evoked in me. Then I turned towards the words, combining text with images.


(MC): So, paradoxically, big cities will become an example of an individualized society.

(DV): Yes, at least that’s my review in their current state. If someone wants a data-driven example, recent studies show that the rise of single-person households is at a never-before-seen level that also marks one society’s wealth.
We tend to reassure ourselves that we have superior social structures than ever before, concentrated in cities, while we are missing out on crucial issues such as declining social sensitivity or mistaking quality of life with well-being.
What I see is we lose touch with reality. Now our transcendence is money, they say. But in this process, our communal nature will soon be long gone, which made us the reigning species once —because however harsh it may sound, we are just simply natural creatures at the end of the day.


(MC): We can define this project as a hybrid between photography and words: how do you to link these two elements and why are they so important to you?

(DV): One night I was standing over my index prints and thought something was not enough this time. Of course, my main intention with this series was always to create a final book, but there was a missing part of the puzzle making it coherent.
When I started reading through the pages of my sketchbook, I recognized that I have many self-written texts that could be usefully combined with the academic references I highlighted. So, at that point, I started to write statements as sort of overviews of my studied subjects, mostly associated with the process of urban sprawl and capitalism.
Later on, I realized the potential in these texts as not only narrative elements but a structural basis for a book. I was very afraid of publishing my own writings as this was a practice I’d always done covertly before, but I concluded that maybe it was now worth the risk. I wanted to present my opinion transparently, even if it’s debatable. Now, these texts are also flexible and independent pieces in the series, fabricating an exciting relation to the images.


(MC): Therefore, photography becomes a collective need to deal with topics that affect society. What do you think about it? In our contemporary times, which is the role of visual arts?

(DV): Art influences our deepest senses, and it alters our perception —a lot of times unwittingly. As an artist, my aim is not to persuade but rather to raise debates on certain topics and encourage viewers to question the orders we often live by.
It also starts with reflecting on the medium itself. Photography per se is in a very specific position because of its long-associated state with documentation and accurate representation, at least in colloquial use. But, in my opinion, instead of searching for the truth, photography deconstructs reality into many different layers —while presenting a visuality that matches our sight. That’s why it’s so obsessive.
At the bottom line, there is not one all-embracing role that visual arts or artists should fulfill. Generally, I believe that people really must challenge their consciousness nowadays. Diving into the world of contemporary art is a strategy to amplify critical thinking. The following applies to the act of observing as well as practicing it.


(MC): Based on the issues you address, are there any writers or thinkers, inside and outside the visual arts, who have inspired your creative process?

(DV): A lot. To answer this question, I can’t just name a few names that influenced the series overall. Based on my concept, certain issues required me to handpick different authors to comprehend. The practical research of urban theorists such as Richard Florida had just as much of an impact on me as the words of Konrad Lorenz or Edward T. Hall.
On the other hand, Mark Fisher, Slavoj Žižek, Byung-Chul Han, and even John Berger’s more subtle critique of the state of capitalism also inspired me, especially when thinking about power structures and determinism.
Next to that, plenty of single research papers and articles were collected in my workbook.
One of which is a great essay from Dolores Hayden titled Skyscraper Seduction / Skyscraper Rape; I recommend that to everyone interested in the topic.


(MC): What do you expect from your artistic future?

(DV): Tough question. Nowadays, I tend to suppress my endless overthinking about the future. I especially stopped having expectations as they create false delirium.
Soon, I want to put an end to this ongoing series in the upcoming months. Nevertheless, I also recently started to build the foundation of a new long-term project that was at the back of my mind for a while.
Time will tell, but I want to use my artistic practice as a tool to experiment and evolve both on a professional and personal level. I arrived at the point where I generally embrace the working process even more than publishing my series. It gives me quite an intense and mindful state that I relish—the joy of learning and not knowing enough. And for sure, I will keep continuing my journey of investigating through the medium of photography.


(MC): Thank you so much Domonkos for your explanations. It was a pleasure talking with you.

(DV): It was my pleasure, and thanks for the opportunity! 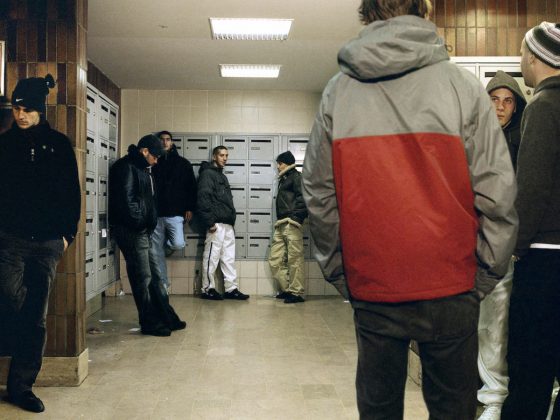