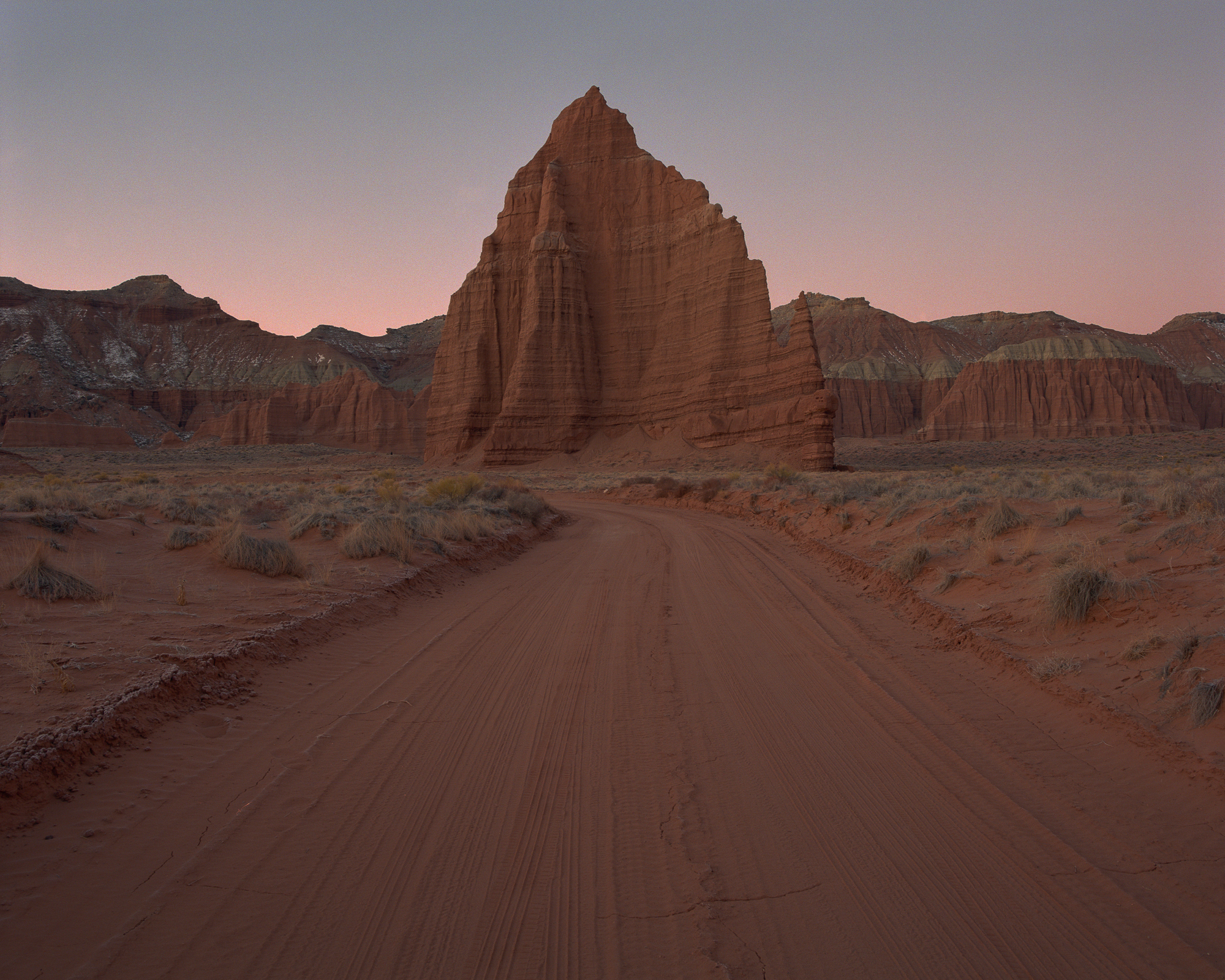 For a week between jobs in late January this year I took a road trip alone through Southern Utah and Northern Arizona. I had never been to this area, so I was excited to explore the varied types of desert, and I opted for some of the less frequented parks and lands in hopes of seeing something unexpected and inspiring. I flew into Las Vegas and saw the Hoover Dam, and then drove out to intersection of Grand Staircase-Escalante National Monument, Lake Powell, and Glen Canyon National Recreational Area, spending two days there. From there I spent one day in Monument Valley, then two days at the intersection the BLM land of Factory Butte and Capitol Reef National Park. From there I spent two days in Bryce Canyon National Park. Given the number of places I was going and the amount of time I had in each, there was never enough time. I tried to go on three to four hikes per day. One at sunrise, one or two during the day to scout locations, and then one at sunset. It felt like I could have spent a week in each place, and will definitely need to do this trip again. I had my Pentax 67 and one lens, the SMC 55mm100mm f/4.5. I only shot with Kodak Portra 400. My goal for the trip was to slow down and experience new places through the camera. I needed a break from work and wanted this to consume my attention entirely. I had places to go, but I hadn’t been to any of them before, and no real shots in mind. The process of trying to see a place with my eyes as a camera, then framing a scene in the actual lens, and repeating until I found something I liked, is a unique way to interact with nature. Especially with the limited number of shots given I was using film, this process forces me to slow down and see a place for things both big and small and to abstract it to colors and lines and then reassemble it. The desert may seem like a simple empty place, but it is full of endless combinations of compositions, colors, and textures. It was a new experience for me to be completely alone for a week, in new places, with only photography to think about. It was exciting, all consuming, lonely, intense, free, challenging. I wanted to take photos that did these places justice, and did my experience of them justice, and it was fun to put that burden on myself. My favorite part by far was the Factory Butte region. I stayed at a motel in Caineville, Utah that was 20 miles from the nearest town, Hanksville, which had one restaurant in a gas station. I was the only person staying in the motel. The motel was perfectly situated between Factory Butte and Capitol Reef National Park, and it had the best access to Cathedral Valley. The isolation coupled with the severeness of the landscape (and a few well placed carcasses) made the area feel almost evil. The buttes seemed to rise out of the nothingness of the desert and then disappear again, as if giant waves looming over you. They are at once erupting into the sky, and at the same time crashing all around you. They are reaching out to you, and at the same time sucking you in. You know a place is special when inanimate objects can feel so intense. I could have spent weeks in this area alone, I would highly highly recommend going there if you are in the region and staying at the Rodeway Inn Capitol Reef motel. As much as I might try to capture the essence of the area, it is impossible to fit its true vastness into a frame. It must be experienced.